I was one of seven, called by the apostles of Christ
I was chosen to serve tables, but God had something else in sight
Prayed for with the laying on of hands, I was commissioned to go
Never once did I think my life would add to the written Word

My name is Stephen. I was called to do a job.
The work for which I laboured was not what I first thought.

Now up to this point my life was very blessed
God was doing wonders that everyone would confess
Until the people stirred up the elders and the people all around
A heretic, a blasphemer, they cried..to the council, there I found myself bound

So as the false witnesses lined up on all sides
They prosecuted my case with vitriol and pride
We heard him speak of Jesus, they began to accuse
That He would destroy this place and change the customs of Moses we often use
Despite the vail that covered their own wicked hearts
They looked on me steadfastly from out of their dark
My face like an angel, God's glory did shine
To reveal God's purpose in the Lord's due time

My name is Stephen. I was persecuted for Christ
Not for my sake I suffered. But for to only carry my cross

"Are these things so?" They continued to ask.
God's time to speak finally came at last
I expounded the scriptures from the first to the last
Beginning at Abraham to the precious blood of the Lamb

As I spoke, their anger and hatred grew more intense with every question:
Why do you resist the Holy Spirit as your fathers once did?
Which of the prophets did your fathers not slay?
That showed you the coming of the One who was crucified in the past several days?

When they heard these things they were cut to the heart
Then they jumped on me to tear me apart
Glory in the highest, the next thing I did see
Was Jesus Christ standing on the right hand of God

This vision I testified right out loud
Then they stopped their ears and drew me out of town
They stoned me until I called on the Lord for my spirit to receive
Kneeling down, I died, praying for the lost; that they would believe


To press toward the mark, the prize of the high calling of God in Christ 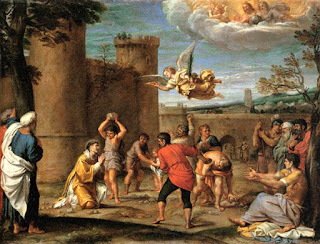