Roughing it in New Orleans For 2 and a Half Days

This testimony is a recollection of a time that I took a bus trip to New Orleans, LA and roughed it on foot for 2 1/2 days. 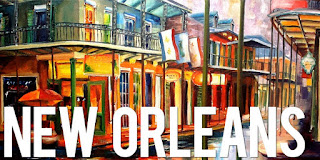 It started in Chattanooga with a growing unease of itchy feet and wanting to have an adventure. So I set out. It took a little over 9 hours to get there (including several Greyhound bus stops) Once arriving at the terminal in downtown New Orleans, I asked which way to the public library. Upon getting closer to the library, I found a public park that had lush grass and trees to camp in. So I laid down and rested until it was the hour for the library to open.

Once inside the library, I filled my jug up with water and used one of the computers there. After a couple of hours, I used the available Wifi connection to pull up the route I wanted to walk and set off. I decided to use a central point of downtown as a base for which I would coordinate my moves.
I would use the Greyhound Bus station, and the New Orleans Mission as points to stay within so I wouldn't get sidetracked. (Both were a few blocks away from each other)

Once I got back to this area, I started walking down a long stretch of road not knowing where I was going. The only thing I remember during this time was walking past an absolute wretch. He was human for sure, but his demeanor and manner and the way he carried himself spoke of a vicious animal. At the time he reminded me of what Peter spoke of when he said that they are unreasoning animals, creatures of instinct, born only to be caught and destroyed, and like animals, they too will perish. (2 Peter 2:12)

At the time I knew enough not to try to talk to him because he would have no doubt lashed out and given me problems. So I carefully watched him pass and took in the spectacle.

It wasn't long after I kept walking along that a young man (approximately 18 or 19 years old) walked out of a side house and started on the path a few yards in front of me.

I called out to him and said something about him and Jesus. I don't recall the exact things I asked or told  him. But for the point of this testimony and an explanation of why I did what I did, I will say it was about Jesus and reaching this guy for His glory's sake.

So there he and I went. I spent about 5 minutes walking side by side with him. However, eventually, he said that he had to go on and started walking faster and left me. Naturally, I spooked the poor kid. But Holy Spirit told me to keep following him.  I didn't let him move  out of my line of sight. And by this time he knew I was following him. It seemed like we crossed areas of the city four or five times. Eventually, he turned into an alleyway, but I kept pursuing him. He went into a house on the block. So I crossed the street and went further down and waited on him. About half an hour later he came back out and started off again. I kept a considerable distance but kept following him. This was when he stopped and hollered at me and asked me what I wanted. I don't remember what I told him. But I'm sure it was something about Jesus. At this point, I could tell that he was getting freaked. And I had the choice to make. Was I going to keep following him like this or leave him alone and let him go his own way? Again, Holy Spirit told me to keep following him.
Now at this point, I had to examine my own sanity in this because even to me it was getting crazy. To make a long story short, this kid ended up going all over the city of New Orleans trying to escape me. We first meet each other at approximately 9 in the morning, and our adventure wouldn't end until around 10 PM that night.

Some highlights of the pursuit were when he got lucky and lost me. He had weaved in and out of stores and streets until I lost track of him. So I remember sitting under a tree, utterly exhausted, and getting a fill of water. At that point, I thought the mission was over. So I got on my phone to call family back in Chattanooga to let them know I was returning. And the second I was about to say that I was coming back, guess who rounded the corner of the road? It was him!  So I told my party nevermind and that I had to go. So I continued my pursuit. It was moments like that when I knew God was in this. A large percentage of the time it made no sense what I was doing; especially when I would sit in the middle part of the highways and watch him while traffic flowed every direction. He called or had people call the police more than once. These times happened when he was either working at a gas station or spending time idle there as his friend worked there. Yeah, the cops came to me at least two times asking me who I was and what I wanted with the boy. I don't recall what I told them. I either told them I didn't have any interest in the boy or told them something else. But either way, they couldn't do anything to me. Because technically I wasn't breaking the law. So this went on until night time. Finally, he walked off from the gas station property and went to a Costco. Apparently, he had friends that worked there too. A couple of them told me to kick rocks and get off the property. To which I obliged (knowing the law) but I never let him get out of sight. Finally, he kept moving to different areas, and we ended up in a huge parking lot.

That's when someone in a car pulled up beside me and identified himself at this kid's older brother. He asked me what I wanted with his younger sibling. And again, I don't recall all that I said, but I just remember the boldness of how I said things. I mentioned that I was on a mission and that Holy Spirit had commanded me to follow his brother from the start of the day. I didn't elaborate why but insisted that the mission was now over. So this guy and I end up talking more, and at first, he was very suspect and kept asking me questions about who I was and why I was there. I kept reiterating that I was on a mission from God. And that's when this man ended up opening up. I suppose he got reassured that I wasn't dangerous or as crazy as it seemed and let me get in his car. Before that, I told him that I had to continue my mission on Bourbon Street and asked him if he would give me a ride there. During the drive, he confided in me that his younger brother and to some extent himself weren't living for God as they should. Before I got out of his car, he handed me a wad of money and thanked me. He prayed for me and then I got out and left, walking the dirty and dark streets of New Orleans some more.

What transpired after was open-air preaching under a corner streetlight (outside a bar), an encounter with two of the friendliest cops I've ever met, a courtesy ride back to the downtown district per New Orleans finest, one of the best church services I've ever been to (at the New Orleans mission's night chapel service, an elegant dinner at the same mission (served up to us like we were kings), a chance meeting with a young woman and her autistic son, (and the time we spent riding on the greyhound together and sharing life)

As you can read, a lot went into this short trip to New Orleans. Much I didn't write about. But it is a primer to me that such trips can be very fruitful and rewarding. I do plan on taking another soon.
By Bart Cofer at 7:46 PM