For the whole world is His and all it contains. If heaven is His throne and earth is His footstool, if His presence doesn't occupy things made from mans hands, then what matter is it the size of His boat, but rather the motion of His ocean?
For there is no speech nor language where their voice is not heard. Their line has gone out through all the earth, and their words to the end of the world. In them He has set a tabernacle for the sun, which is like a bridegroom coming out of his chamber and rejoices like a strongman to run its race.
But getting back to the matter at hand: Faith came by hearing and hearing by His word. So as I laid there, I softly hoped beyond this world that my most inner of innards would receive what He intended to deliver to my most precious crevice. I had guarded it well, according to His word, (Proverbs 4:23) and now I was awaiting the deposit that would shortly soon prove to be the conception of something beautiful.
I could hardly make out His form or figure, but the words He spoke to me were unmistakable and undeniable. He spoke to me about the wind, and I perceived this was real, like the warm breath of Someone I could feel against my body as I laid there taking Him in. He spoke to me about the rain, and I perceived this was real as I made out motions of His hand as He stretched it out to me. I closed my eyes, and it was as if I could feel the refreshing mist of His water dripping on my body. He spoke to me about the sun, and I perceived this was real as my person, beginning from within going out, felt the heat of His radiance emanating inside and flowing out.
I tried at times to analyze His voice. For I knew it was intriguing to examine. But experience had taught me that even though His voice was fascinating to ponder; it was better to just obey. So I relaxed my being as the nature of the ocean waves continued to amplify and bring His voice to my person.
Only when the divine intersects with humankind can it be said that rivers of living waters shall flow out of a person's belly, but I could believe and feel that this was what was taking place. I had no way to stop it. Neither did I desire to. With what was first a building stream soon became a raging torrent. It was never still; never silent. Quickly, (whether my eyes opened or He made Himself known closer, I do not know) but I heard Him speak clearer now than ever before with these words: "Open your mouth."
"Alas, Lord. I do not know what to say." I replied.
"Do not fear." He answered. "I will give you the words to say."
So I opened my mouth and before I could think of a single word to utter, the words came out: "But it is good to be zealously affected always in a good thing, and not only when I am present with you.
My little children, of whom I travail in birth again until Christ be formed in you,I desire to be present with you now, and to change my voice; for I stand in doubt of you."

"For you have been born again, not of perishable seed, but of imperishable, through the living and enduring word of God." -1 Peter 1:23 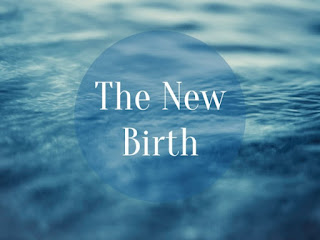