The Obedience to the Faith 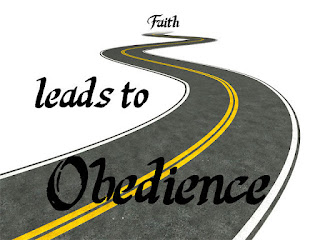 is about, I would point at two verses that serve as the

“book-ends” of the book of Romans. They are found in

written for the “obedience to the faith”. In this blog post, I

part in when they obey the Lord.

This is the first step of any believer’s obedience. And it

has the potential to be the most difficult; but one of the

Christians as they operate in this grace of obedience. It’s a

a beautiful thing to see people live simplistically as

they go about their lives abiding in God, delighting

themselves in Him as He gives them their hearts’ desires.

thing when people take the scripture verbatim and go about

carrying out what it says.


There will always come times throughout the lives of

believers where we will need to obey the Lord thru the

guidance and counsel of other Christians who have insights

on how we should go about doing things. However, this form

This has been my favorite way of obeying God for years.

I just love to hear personally from God. It has even gotten

to the point where the Lord has given more emphasis on

other forms to bring me into more maturity of obeying in

other areas of this five-fold grace than just hearing from

This one is similar to obeying from godly counsel. But it

focuses on being obedient to God by responding to the needs

of others. Many Christians throughout history have leaned

heavily on this point to become obedient to the faith. And it is

In conclusion, what I would submit here is that throughout

the life of a Christian, we will follow thru with all of these

principles in our walk. And while believers may put more

emphasis on some rather than others in this five-fold grace,

the more we engage with each one of them, the more mature

we will become in time.