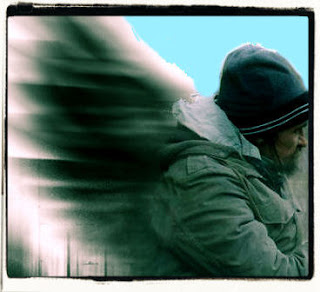 Wow. I had to stop off here and make a post about one of the craziest experiences I've had in a long time. I'm just returning from the Salvation Army where I went to inquire about speaking during their night shelter days. And boy did I run into a character there at the Army. He greeted me upon entering as the "boss" of the place, and that was just the beginning. Now I've known my share of loonies, and even though this cat was eccentric as all get out, he had had an air of authority and legitimacy about him that heralded my attention from the start. From what lasted near half an hour he took me around the place and never let up. It started in the lobby and then he took me around the halls of the place where there are dozens of portraits of biblical characters hung on the walls. I can't begin to describe what this person began to say about each hero of the faith as he pointed them out to me, and related their lives as we walked along, but I can tell you he knew the Word of God. It's like he kept going back and forth between two extremes: Worshiping the Lord and calling things as he saw 'em.


One primary focus of his engagement was lamenting over one individual that he kept saying was backslid and such. I don't feel like I need to get into specifics with this. But this portion of our meeting climaxed when after we or should I say he took time to go into a person's office. And after he had closed the door, he took out a guitar and started making one of the most wildest and anointed praises I've ever listened to. At one point, Holy Spirit told me to just listen. It would be easier to describe what he didn't relate in his praise rather that what he did. But I'll get to that in the conclusion of my testimony.


Anyway, it was a little while later when the occupant whose name was on the door came bursting in. Not much needs to be said here except to say I knew who we were dealing with now. With a few harsh words to my host and a quick greeting and excuse from myself, we left the room and let out to the main auditorium. There, I struck up a conversation with a previous acquaintance from the streets while this other figure started serenading another visitor in the room by himself on guitar.

Finally, I rounded out my conversation with my friend, and made my way back to this dude's office. I reintroduced myself as politely and understandingly as I could to him, exchanged contacts and left. But before I did, I got another name of someone else in charge that I could speak to about coming back, and then I returned back to the auditorium and asked "the boss" of who this other man was and where I could find him. He then led me back down another hallway to another door and asked me my name and number to which he wrote on his dry erase board attached to his door.


And then as I was about to leave, (I can't remember who brought it up first, him or myself) but we agreed to drive around together. By this time, I knew exactly who this person was after spending sufficient time hearing him talk and Holy Spirit confirming it to me. But we got in the car and left the Army property. He told me to go down one street to which I obliged. And it was there he began again telling me his history of being in different prestigious houses and whatnot. One peculiar thing however, he insisted that I kept the worship music blaring on the radio during our brief excursion. He rode in the car like he was in his own world. He kept talking to people on the streets out of the window. And one thing I observed was that he caught everyone pleasantly. They always had smiles on their faces when he engaged them. The only time I ever noticed when people would say an off word to him was when (back in the Army) he wouldn't stop worshiping God.


Anyway, at one point he mentioned that the hospitals were full of sick people and since he owned it all, he would take it upon himself to go in and minister to people there. So it was Holy Spirit who told me to make the next turn. There was a CARTA bus in the right lane and God had me make a right in front of it and turn down the street was the Emergency Room was. As we were approaching I knew I was close to the point of having to drop him off. I was about to turn into the ER drive-thru when he spoke up and said to keep up a little further and turn left. That there was going to be a spot open for him on the left. And as I turned there, it was exactly as he said. Once we got parked, he turned the music up on the radio even louder and that's when God got a hold of me. Call it an anointing or whatever but there was such a song released in my heart and lips that was a sound that matched the music playing but was entirely different words than what was being sung from the artist. I'll be honest, it was during this time that my attention wasn't so much on this other person; but on God was had me crying and lifting my heart to Heaven.


Still aware that this person had stepped out of my car and was doing his thing beside me, the only thing that was running thru my mind (and had been for some time) was the premise behind the song, "Favorite Song of All" And that's what was holding my heart at the present time.

To conclude, we firmly shook hands. And I can barely still recall the glimmer in this person's eyes as we departed. And as I write out this testimony now, I fully understand the ramifications of 1. What this means to myself or anyone reading...1 Corinthians 2:14 - "But people who aren't spiritual can't receive these truths from God's Spirit. It all sounds foolish to them and they can't understand it, for only those who are spiritual can understand what the Spirit means."
And lastly, one promise in Hebrews that has come to pass today in my walk: " Be not forgetful to entertain strangers: for thereby some have entertained angels unawares. " (Hebrews 13:2)